So you see this message about a first chance exception in your debugger’s output window, your brows rise, you glance through the code back and forth and can’t see a thing. What’s more, your application runs just fine and the exception doesn’t manifest itself in any way rather than this annoying debugging output. You shrug and… Stop! You got a bug. Whatever you’ve been doing – just put it off and fix your code before moving on.

I got this message in my output window too:

A first chance exception of type 'System.NullReferenceException' occurred in core.adapter.dll.

This is one of the components of my application and despite the fact that exception was thrown the application continued to function just fine. I understood that it was just probably caught somewhere else in my application code (otherwise it would have taken it down) but the debugger was kind enough to notify me that there was something wrong.

To find the place where the exception originated I modified Visual Studio’s exception rules (Debug –> Exceptions): 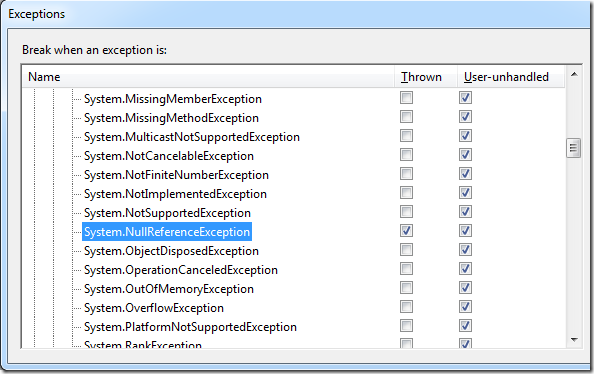 See by default during the debugging session Visual Studio will break the execution when your application code doesn’t catch an exception. But we also can make it break at the time the exception gets thrown.

This change easily revealed the spot:

The _mediaWindow private member just wasn’t instantiated yet when something accessed that setter. And that ‘something’ happened to be in the main component of my application that was loading user preferences on startup. Here’s the sketchy code:

As you can see there is a pretty general catch block whose primary purpose is to protect against IO errors. However, it also swallowed the System.NullReferenceException.

This single example discovered a few potentially dangerous places in my code and raised a bunch of questions:

I’m going to find my way through these questions anyway but the moral of story doesn’t change: never ignore the debugger output.