If you’re a web developer you’re probably familiar with System.Web.Script.Serialization.JavaScriptSerializer that's heavily used by ASP.NET AJAX framework and of course you can use it to convert managed objects to JSON so it can be consumed by JavaScript.

Also, since .NET 3.5 there is System.Runtime.Serialization.Json namespace that includes DataContractJsonSerializer that you can use to serialize/desterilize managed objects to/from JSON strings. You can also influence the way objects get serialized with various attributes that you can apply on individual members. What attributes you use and what members will be included in serialization depend on whether you mark your object as DataContract or mark it as Serializable.

Still, both serializers assume you have a managed class that describes your data structure. But what if you don’t know the structure of your data upfront? All you know is that it’s going to be represented as JSON and you just need an easy way to parse it and extract the value by a known key if it exists.

Luckily, System.Runtime.Serialization.Json namespace also includes JsonReaderWriterFactory class that makes it possible to consume JSON data from a string and read it as an XML document. Basically it constructs a special version of XmlDictionaryReader that you can use either through a traditional XMLReader interface or you can feed it to XDocument and consume your data through Linq To XML.

JsonReaderWriterFactory can also play in the opposite direction, that is it gives you a special version of XmlDictionaryWriter and you can use standard XMLWriter/XmlDictionaryWriterinterface to output your data that will be written to a stream encoded as JSON. This may seem less important than reading as you control your data and you probably have an object graph representing it. So you can just use of the serializers. Still, the more options the better. In fact, DataContractJsonSerializer uses JsonReaderWriterFactory under the hood.

Ok, back to reading. Say, we were told that an authentication token will passed as part of a JSON string. A JavaScript developer also wanted to reserve a possibility to send more data to our managed component as part of that object. So in the end we received the following string:

See how easy it is to read this data:

Here’s the output of the sample: 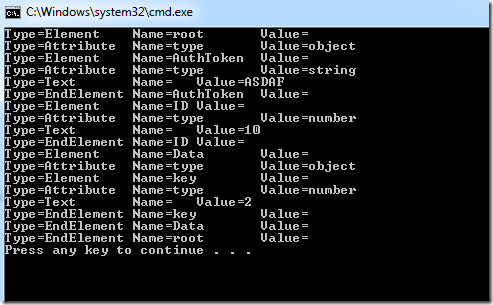 Looking at this output we can construct the following XML document:

If we have a little more knowledge about the structure of data we can use more efficient code. For example, if we know that the authentication token is within an ‘AuthToken’ element that is direct child of the root element you could write the following code:

But even if we don’t know exactly at what level the authentication token is but we know the name of an element or an attribute containing it we can at least find it by going through the document with XMLReader.

Important note for those targeting .NET 3.5

In the 3.5 version that namespace is missing. However, it is found in System.ServiceModel.Web assembly (basically because new JSON serializer was implemented for WCF needs first). So you will need to reference all these 3 assemblies:

If you target .NET 4 you need to just reference System.Runtime.Serialization.dll.